This Image Sums Up The Modern Beer Industry.

Sorry I have not posted in a while, technical hitch and laziness. From now on I'll just post big blog posts when I think  of them.

Yes, it's about craft/keg again.

The attached image is a marketing shot for a recently refurbished pub in Sheffield who have gone down the proper beer route while having a mostly student client base.

When this was spotted by a friend and uploaded to Facebook it almost went viral, in the many comments it seemed all out war would break out between the Craft Hipsters and Real Ale Twats.

If you can't see what all the fuss is about, I'll explain, this board shows 5 craft/keg beer options, all of high quality from outstanding breweries. The three Cask options are disappointing, one regional mass market brewer, a pleasant local session pale and a cider.

I tried to work out who would place these flimsy Cask options against those keg giants and it made my head hurt.

The problem here that really needs to be solved before keg wipes out cask is the lack of innovation. The top 5 beers are modern, forward thinking, innovative beers. The bottom 3 are mass market, boring and cider.

I'm not having a go at Real Ale here, if the cider was replaced by Great Heck Shankar IPA I'd be straight on that before any keg option on that list. Great Heck, to my knowledge, have never done keg beer but I have placed them up in my top 5 brewers. However, just over a year ago I would have ignored them as much as the Abbydale Moonshine on this list because (and the brewer himself said it to a friend of mine just the other night "My beers were shit") I thought they were dull.

Great Heck had the balls to admit their beer wasn't outstanding and then had the balls to change that, as well as re branding to match the quality of the beer. Many people now get very excited when they see the words 'Great Heck'.

They are proof that Real Ale still has it's place in bars, it just needs a kick up the arse now and then.

This brings me on something I'd like to see CAMRA do in a perfect world;

Stop fighting for the return of Mild, Mild May is coming up and I know my local beer festival will end with many a wasted barrel of Mild from the campaign to bring it back to watch it get poured away.

Sometimes it's good to break away from tradition, embrace the new, support innovation yet still serve it fresh from the wood. Keep Real Ale exciting. 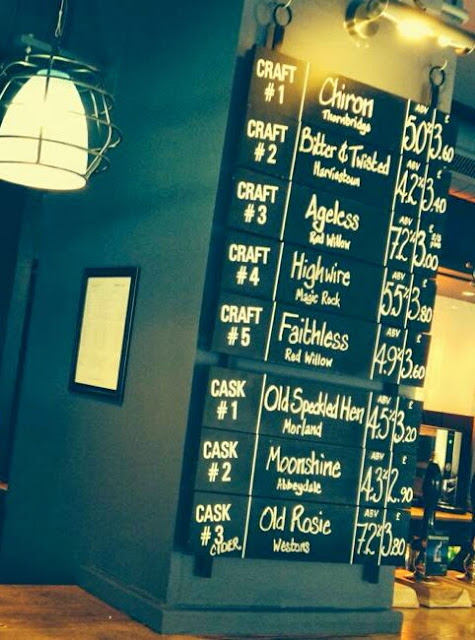 Another Pint For Unknown at 12:26 pm
Email ThisBlogThis!Share to TwitterShare to FacebookShare to Pinterest