After my all out, shock tactic filled attack on The Real Ale Twats I feel it is time to talk about the problems that the craft industry is causing itself.

Image is important in business and life as a whole, it can make the difference between your product being bought or not. Your chances of your product entering Tesco and the like is next to none if you have the wrong image. In life image can lead to not getting the girl or not having the right friends. As humans we are shallow.

The problem with image is that anyone can create on, it only takes around 30 minutes with photoshop to make an eye catching label and a matter of weeks for a full rebrand on your business.

Craft beer has been about image from the start, look at the people who usually drink it;
Hipsters, Students, London and other city based young cool people. Sit in a 'trendy' bar like Craft in London, Friends of Ham in Leeds or Tap on Sheffield station and you will see this people. Fucking hell, I'm one of them. The nice leather shoes, the floral shirt with the blazer on top, an ironic and bright coloured winter hat.

Right now though I feel craft is letting image take over with substance coming second, it's even ending in fights between brewers (Weird Beard and BrewDog Vs. Camden over the naming of a beer was ugly the other week).

So let us start with BrewDog, the first hipsters on the UK beer scene, who started with a great image of pure Punk! Punk IPA standing out, Hardcore IPA at 9.2% ABV and many other beers that shock and grab headlines. But dumbing down beer and changing the name for the likes of Tesco? Causing a bigger issue than I did with CAMRA that many think was planned well in advance?

It doesn't quite all add up. Yeah, I'm a BrewDog shareholder, I try to taste every beer they make, I have met James Watt and I even own a bottle of Sink The Bismark to drink now and then. The reason? They make amazing beer and helped to launch the craft beer scene and make it what it is today. I don't think they have sold out as many do, they have just made clever business interests and grown up a little. The image, however, has not grown with them.

Camden Brewery is another who seem to have image and substance on very thin ice, the beers have never made me go 'wow' but I really did enjoy them. The image is modern and young, London based and hipster again. But they now use product placement in Jamie Oliver cooking shows and pick on much smaller breweries with a totally different image for using the word 'Camden' that they claim to own the rights to.

A new beer caught my eye a few weeks back, a screen printed bottle in Sheffield Tap with nice writing and an American brewer feel about it, it was pale and hoppy so I tried it. I liked it.
It turned out to be a new UK brewery. Since then I have found out it is run by an 'Art Director', a man all about image and grabbing attention. I had fallen for it, I've tasted it since and didn't like it quite as much. It is clear this brewer is going for a cool image because the craft beer industry is 'leading in it's sector'.

I fell for it. I'm part of the problem.

Will these beers have the same passion and honest intentions of other craft brewers? I bet not, I met a rep from York just the other day with her folder, iPad and marketing posters.

When it comes to picking up your next beer just put a little research into it, check Rate Beer online to find out if what is inside the bottle is as good as what is on the outside.

A real, set in stone meaning for 'Craft' in the UK might be a good start too. 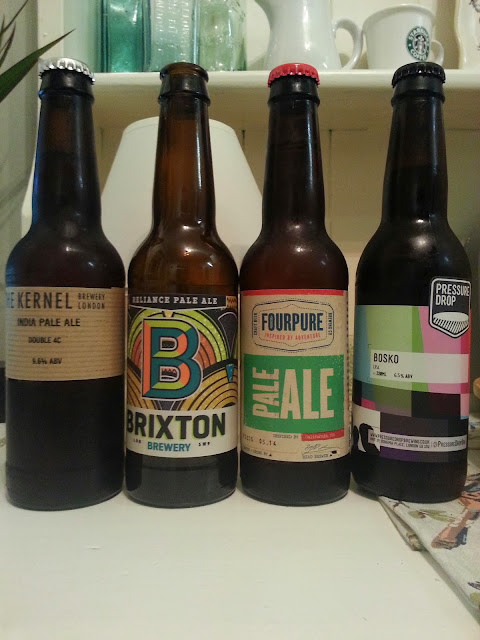 Another Pint For Unknown at 6:12 pm
Email ThisBlogThis!Share to TwitterShare to FacebookShare to Pinterest